Watch for the big Breakdown in Technology Stocks 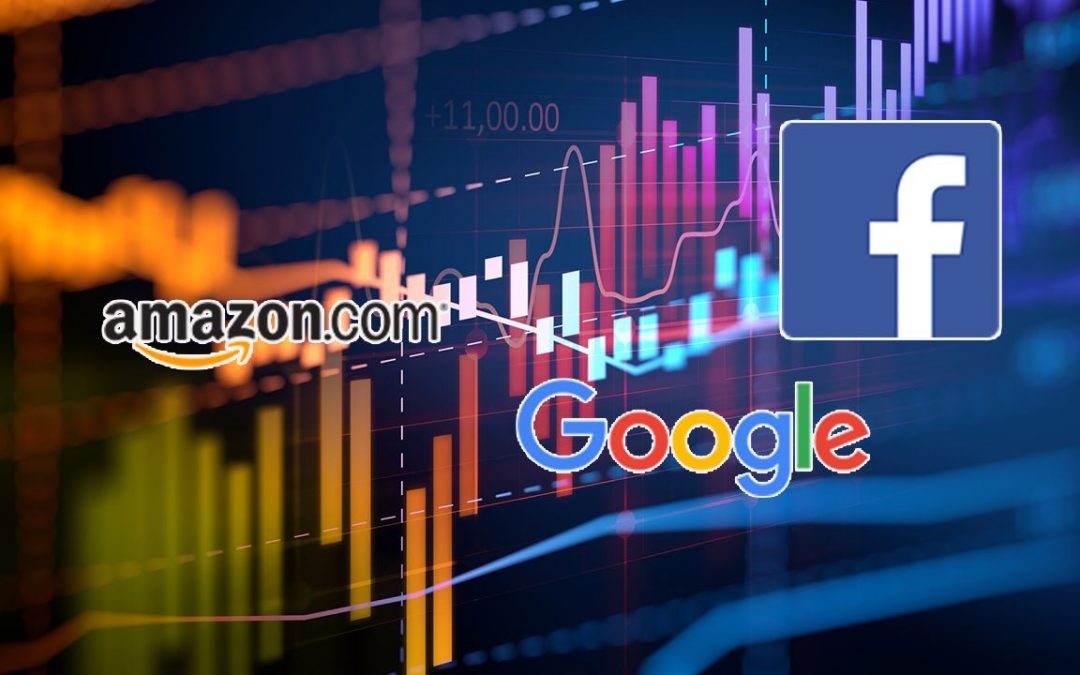 As our readers know, Chandler Asset Protection Ltd was amongst the first commentators to call the end of the rally in technology stocks in February 2018.

Since then, the main leaders of the 2009-2018 rally, the FAANGS failed to make new highs and are putting in a major complex top.

MICROSOFT Inc is the last one to make its secular top…

Considering the configuration in global equities and the signals sent by the bond markets, a break down in the FAANGs is only a matter of time, and this time span may actually be very limited.

TOO BIG TO SURVIVE …

As our readers know, besides the maturation of their home markets and of their business model, our case for turning negative of the leaders of the 2009 – 2019 bull market, the FAANG + Microsoft hinged on the fact that they had become too powerful.

The chart below plots the aggregate Market capitalisation of the 6 American technology giants.

In five years, their combined market capitalisation rose 4.5 times from 1 to 4.5 Trillion. Today, these 6 corporations represent 1/5th of the US GDP and almost the size of Japnn’s economy, the third largest in the world.

These companies with no controls, no regulatory body, no limitations and full secrecy on their algorithms and data usage are now under growing scrutiny and the accumulation of anti-trust probes into their businesses and dominant positions will one day come to recommendations that will inevitably be detrimental to their business models and profitability.

We have created our own FAANG index made of the aggregate price of the five FAANG stocks since 2014.

After having recorded THREE tops since August 2018, the FAANG index has now recorded a lower top and broken the December uptrend. It is now testing the short term moving average which is turning down.

After having recorded a major double top since its secular peak in August 2018, and is testing the uptrend in place since December 2018

On a daily basis, Facebook Inc. JUST broke above the downtrend yesterday, but the two moving averages may act as a serious resistance level and a break below 180 would be an extremely negative sign.

Since August 2018, AMAZON has already recorded three tops and has now broken below the uptrend in place since December 2018. It is bouncing on the key 1750 level which is also the short term moving average.

On a short term basis, the rebound is limited and the 1750 level is to be tested soon while the shorter term moving averages are delivering a “Death Cross”

Apple is launching its iPhone 11 these days but it was also singled out today by Google for having a major mass security flaw that may have enabled hackers to access the data of billions of iPhone users.

The stock is bouncing with difficulty off the June uptrend and it is only a matter fo days before it breaks it to the downside.

The Daily chart shows the weak upside momentum and the sharp breakdowns. The up triangle is a continuation pattern that points to more weakness ahead. WATCH the 200 level

Netflix is trading on a major, major support which is its long term uptrend after having recorded multiple tops since April 2018. It crashed through its moving averages and a break below 280 would be extremely negative.

Shorter term, the down trend is well established and although there is a large gap to fill up to 360, there is strictly no guarantee that it will be the case.

Google is on a crucial rebound from the June uptrend after having recored three major tops since July 2018 and lower top at the time of its earnings in July. It is only a matter of time before it breaks the uptrend to the downside and tests its long term uptrend.

Google filled all its gaps and has actually broken the June uptrend. YEsterday’s attempt to climb above the trend will be difficult as the 1200 resistance is extremely solid.

Bill Gates’s Company is today the world’s largest corporation by Market capitalisation.
Its has been the linchpin of the entire 2009 – 2019 bull market and took the indexes to new highs in 2019.

However, it marked a major top in July 2019 and is now testing the December uptrend with a clear SELL signal at the MACDs.

Shorter term, MICROSFT wil test the upper band of the downtrend in place since July. Failure to break above will send it testing the CRUVIAl 131 – 132 support level .

If that 132 level is broken to the downside, then the entire US equity bull market will be over for good.

One of the best way to play the structural downside in the FAANGS for investors who do not have the possibility to Short stocks, LEONTEQ has issue a Swiss Index Certificate that delivers 2 Times the negative performance of the FAANG basket.

It can be acquired through any bank by quoting the Security Number ISIN CH0473355524 to their bank.