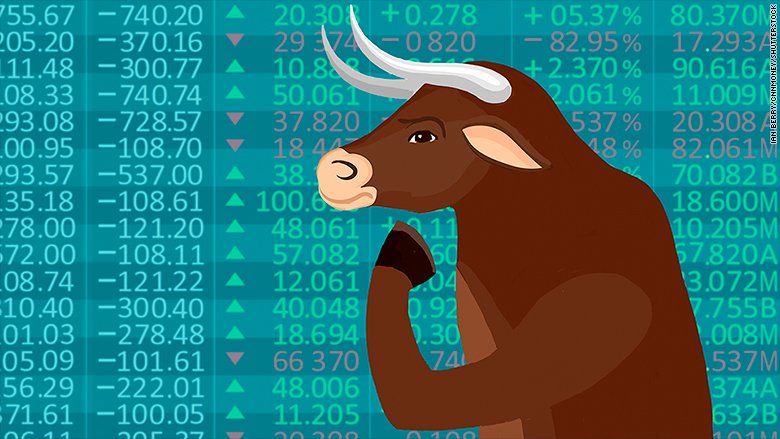 The MSCI World Equity Index and the US SP 500 broke above their July all-time highs yesterday taking their positive performances since December 2018 low to + 25 % and + 28 % respectively.

The markets are making new highs on the back of better than expected earnings, but the unsettling part of the equation is the fact that these rises are happening in an environment of decreasing corporate earnings.

Most of the S&P 500 Index members that have reported third-quarter results so far have beat analysts estimates, however, in aggregate, the quarter’s earnings are coming in about 3% lower than a year ago. Another 157 companies in the index are reporting earnings in the week starting Oct. 28.

AMAZON reported the first decline in profits since 2012 but its share price has gone up ultimately, and Google’s parent company ALPHABET reported a significant decline in Q3 Earnings 3Q EPS $10.12 vs. $13.06 y/y, and way below analysts estimates of $12.35, nevertheless its shares jumped to a new all-time high.

Granted, the current environment is one where the monetary policies engineered hy the the FED, the European Central Bank and the Japanese Central bank are flooding the market with massive liquidity and where negative real rates are pushing investors to stocks by lack of investable alternative.

Bond yields are so low that there is no value anywhere, cash is yielding nothing, equity dividend yields are comparably high and investors expectations that the Trade War will be soon solved are making them think that the significant economic downturn feared by the Centra Banks and touted by the bond market will not happen.

Normally, equity markets should be worried about the coming economic downturn and the persistence of weak earnings growth particularly at a time where valuations are extremely high.

Obviously, all this makes it extremely unsettling for long term investors who have conflicting signals.

The short term technical signals are bullish without a doubt, but the longer term fundamental signals are extremely negative, including impeachment, popular uprisings, budget deficits and climatic changes.

Ray Dalio, the President and founder of the world largest hedge fund just sent a very cautions message to the world form the Future Investment conference in Saudi Arabia, warning about a potentially cataclysmic combination of events.

The net result is that there is probably a limited upside but a very large potential downside.

For the first time in 20 years, big money is betting against stocks.

The latest semi-annual survey of big money managers by Barron’s showed a Bull Ratio below 50% for the first time ever, far surpassing the previous all-time pessimistic reading in October 2002.

When the semi-annual survey of large money managers from Barron’s came out in the spring, it showed a curiously low level of bullishness. Only 49% of the managers expected stocks to rally going forward, one of the lowest levels in years.

In the latest survey conducted from late September through mid-October, that bullishness plunged even further and recorded an all-time low.

As the chart below shows; when smart money confidence falls towards 30 %, a significant correction ensues.

The thing that is REALLY DIFFERENT this time is the BULL/BEAR RATIO that fell in. negative territory for. the first time in its history.

The percentage of bulls is low, but percentage of bears is high meaning that sentiment among big money managers has collapsed to the lowest on record by far, and collapsed extremely quickly.

institutional asset managers are not stupid. managing money is their full-time job. They are people who perform in-depth analyses before making investment decisions and at worst highly educated guesses. They rarely get things wrong all at once.

Their sharp decline in sentiment heralds something big ahead.

The S&P 500 broke out to its first all-time high in more than 50 sessions, yet fewer than 8% of its component stocks managed to hit even a 52-week high. That is below average for a breakout attempt.

The CBOE VIX index is sending a weird signal

There are currently several extremes in VIX sentiment indicators, with an overall bias toward pessimism, which usually means a spike in the VIX at some point in the future as we highlighted in our latest comment on our Model Portfolio.

When aggregating a handful of VIX sentiment measures into one, the conclusion is that it has dropped to its lowest level in months. For the first time in more than 50 days, the VIX Sentiment indicator has declined below 2.75, ending one of the longer streaks since 2006.

This usually precedes a spike in the VIX. It does not mean however that the Index is bound to go lower because a lot of it may come form hedging activity by bearish institutional investors.

Major break-outs are always situations where an investment manager has to question, and eventually change his strategic or tactical exposure

We just got the breakout after 4 previous unsuccessful attempts, now we need to see if buyers have enough reasons to defend it.

We have been cautious and hedged for quite some time now. The problem for us is whether to take off our hedges or stay prudently hedged. In the shirt term, the enthusiasm of small investors is causing us volatility.

However, Stocks have been exceptionally choppy, and the moves in bonds and gold are well beyond what we typically see historically.

We have argued consistently that bonds are at/near a historic peak, and gold is probably undergoing a major long-term trend change, in line with our case that we have entered the first and inflationary phase of the Kondratieff cycle.

However, both tend to be accompanied by high risk, and we are not seeing anything there that makes us want to add exposure apart from China, Europe and to some extent small caps in Japan and India.

One thing is for sure; if this proves to be a false breakout, then the downdraft will be extremely sharp.