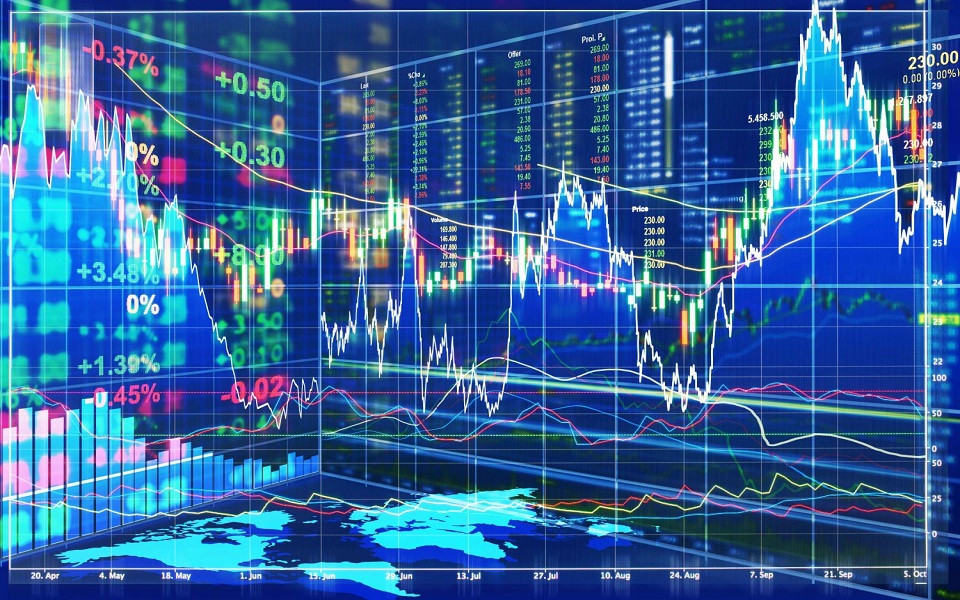 Bonds rose across the board as risk-off sentiment sent investors for cover.
AVOID

There is more and more evidence that the Q4 trading bottom is forming, and any near-term volatility is part of a basing process before a significant rebound into year-end. Global indexes are oversold.  BUY ON WEAKNESS

The October bottom is clearly a trend-ending phenomenon and completes the entire 2018 bear phase. MACDs are oversold and turning. Additional weakness next week should be used to increase exposure.
BUY ON WEAKNESS

The three stages of the 2018 27 % correction are now completed and the October bottom marks the end of the Bear phase. MACDs are extremely oversold. BUY ON WEAKNESS

The strong rebound in the Dow Jones Industrial in the past two weeks has brought it back clearly into its 2016 uptrend and above the moving averages. The picture is positive but we would not chase the upside as we doubt that te Index will succeed at making new highs.

Last week’s rebound was less strong than the one of the Dow Jones Industrial and the larger SP500 failed to hold above the2016 uptrend and the short term moving average. We see some weakness next week before a new attempt at going higher.  NEUTRAL

The technical damage in tech stocks and the Nasdaq is considerable and last week’s failure to make significant headways above the 2016 uptrend confirms that the tech leadership has ended.  SELL ON STRENGTH

As is the case with technology, US small caps technical picture has deteriorated considerably and last week’s failed rebound points to more weakness in the coming two weeks.  However, this should provide the base for a strong December bear market rally.  TRADING BUY ON WEAKNESS

Canadian stocks are extremely oversold and dangerously testing the all-important 15’000 support.  The lack of strength of last week’s rebound is not a positive sign for the short term but we still see a Bear market rally unfolding in December.  TRADING BUY

Donald Trump’s half victory in the US mid term elections was not taken as a good sign for Mexico and last week’s decline is a bearish reversal after a failed attempt at new all-time high.  It is too early to become outright bearish but the 28 % rally since June is long in the tooth. WATCH

Europe’s bottom is clearly in place and last week’s weak bounce is part of a major basing process before a significant leg up in the end of the year.

The next significant resistance area is at around 3262, but we expect weakness next week and the formation of a higher low before the resistance is broken.   BUY ON WEAKNESS

British shares are oversold and a significant double bottom may be forming. However, the momentum of last week’s rebound was weak. The index is oversold and the MACDs are tentatively forming a BUY signal.
Any positive news on a successful VREXIT negotiation would send UK shares soaring.  ACCUMULATE

Swiss equities have been particularly resilient in the October correction, holding above their 2016 uptrend and rebounding above the moving averages.  BUY

The momentum of the German stock market remains weak and auto stocks were hit particularly hard last week. However, a strong bottom is not in place at 11’000 and any weakness ahead should be taken as an opportunity to accumulate.   ACCUMULATE

A very strong bottom is in place in French equities at the 9’000 level within a horizontal consolidation dating back to March 2017. BUY ON WEAKNESS

Spanish shares have formed a significant bottom and any weakness in the coming two weeks should provide a great buying opportunity. The current 9’000 level is a strong long term support area form which the 2016 – 2017 rally started.  BUY

Last week’s rebound was weak as Italy is still wrestling with the EU on its budgetary choices and economic data points to no economic growth at all. Italian shares may fall further in the near term.  However, the 25 % fall in Italian shares since March have restored value.
ACCUMULATE ON WEAKNESS

Last week’s weak rebound and failure to hold above the long term moving averages are not positive signs for the Portuguese equity market. A more significant basing process is needed before adding to Portuguese equities.
AVOID FOR NOW

Athens was one of the best performing equity market last week and its strong weekly close is a clear BUY signal. The current trading area is a significant long term accumulation zone and the MACDs are clearly turning up. ACCUMULATE

Russian equities are still amongst the cheapest of the world and for now they are trading in a lengthy horizontal consolidation channel dating back to mid-2017.   Last week’s rebound failed to take the index above its moving averages and the sharp decline in Oil prices is not a positive for their resource rich index.  However, a better commodity complex pattern could be a significant positive for Russian stocks.
NEUTRAL

Last week’s consolidation of the higher low does not negate the constructive technical picture of the Turkish stock market. Only a break below 900 would warrant existing Turkish equities.  HOLD

Japanese equities remain in a constructive horizontal consolidation above 21’000 and although last week’s price action failed to pull the index back above the 2016 uptrend and the short term moving average, the picture remains positive.  BUY ON WEAKNESS

The larger TOPIX index is less promising than the Nikkei 225 and the 1672 resistance level is strong.  Conversely 1600 is also a strong support, so the Index could go both ways with a solid downside support at 1’500.
A clear break above 1680 is needed to reinstate the bullish trend. WATCH

Japanese small ad mid-caps have finalized their 2018 bear market and the October bottom is solid. The MACDs are more over-extended than they have ever been and a break of the 2018 downtrend would send a very strong BUY signal.   ACCUMULATE

Chinese equities were the only equity markets to end the week in negative territory last week as investors interpreted the half-victory of Donald Trump as a strong negative.

The -4.52 % fall last week shows that Chinese equities are prey to speculator and hedge funds as the large cap index underperformed all the other Chinese indexes.  However, it failed to close below the strong 11’000 support that has been the base-building level of the past three months.

We expect a strong rally to unfold in the coming weeks.  BUY

The picture of the CSI 300 is much more constructive and last week’s -2.92 % fall was not powerful enough negate the solid bottom recorded in October. The MACDs are forming a significant BUY signal.    BUY

There again, last week’s fall was just a correction of the previous move and does not negate the strong bottom recorded in October. A break of the 2018 downtrend would constitute a very strong BUY signal.  BUY

Last week’s price action in the H shares index reveals that foreign investors are less negative about the Chinese market than domestic hedge funds and that the 2018 bear phase is ending.  The MACds are forming strong BUY signals. BUY

Taiwanese stocks are deeply oversold and ready for a bounce.
TRADING BUY

The sharp bounce in Singaporean stocks from the 3’000 level is a strong sign that the 2018 correction is ending.  BUY ON WEAKNESS

Indonesian stocks are consolidating horizontally and have been little affected by the October global sell-off.  ACCUMULATE

A strong double bottom in formation at a long term accumulation level calls for strong accumulation of Malaysian equities at current levels.  ACCUMULATE

A double bottom and even higher low form the long term 1600 support argue for a strong accumulation of Thai equities at current levels.  ACCUMULATE

Vietnam is confirming its double bottom at the 900 Cleveland is holding above the long term moving average. We expect more sideways consolidation before the uptrend re-instates itself.  WATCH

Indian equities seem to have found a floor at 10’000. Last week’s small retracement is a positive signal. ACCUMULATE

Australia closed the week up and the October correction has opened a great opportunity to enter this market, particularly considering the positive configuration of the Australian Dollar.  BUY ON WEAKNESS

There again the October correction may have provided a great opportunity to enter the New Zealand equity market with a good entry point in the currency.  BUY ON WEAKNESS

Last week’s strong relative performance of the Dubai equity market constitute a tentative BUY signal. A higher low is needed to finally confirm the end of the 2018 bear phase. ACCUMULATE

Saudi shares are bottoming out and the October bottom at 7’000 is solidly in place. ACCUMULATE

The US dollar sent mixed signals last week as the FED’s meeting confirmed another rate hike in December. The EUR fell against the Greenback but most Asian and emerging currencies rose against the US Dollar.  Although the technical picture is neutral, we expect a tactical pull back in the US dollar form now until the year-end.   NEUTRAL

Although the Yuan had a knee-jerk reaction after the US mid-term elections, the Yuan is reaching intervention levels and the MACDs are delivering an extremely strong BUY signal.    STRONG BUY

The EUR weakened last week but closed lower than the 1.1301 level recorded in October. The technical configuration is neutral for now but we expect te EUR to strengthen soon with a target at 1.16 – 1.18 into the year-end.

Contrary to the EUR, the Japanese Yen weakened against the US dollar last week although without making a new low.  The long term trend remains negative but the Yen could appreciate marginally in the weeks to come.

BUY the Australian Dollar. The break of the downtrend and the rebound form the 0.70 level are strong positives for the AUD against the USD. The MACDs are delivering strong BUY signals.

BUY the New Zealand Dollar on weakness. The break of the downtrend and the rebound form the 0.65 level are strong positives for the NZD against the USD. The MACDs are delivering strong BUY signals.

The British pound has completed a significant double bottom and should normally start a new up leg.  Successful BREXIT negotiations could provide the catalyst.  BUY

Last week was the first sign that the TRY uptrend maybe losing momentum.
However, the divergence from the moving averages is still too high and there could be some more mileage.  HOLD

Last week’s break down in the value of the ruble shows that the weakness in oil prices is starting to hit the Russian financial system. A quick reversal is needed to confirm the bullish bias.  WATCH

The Indian currency has turned the tide and should start appreciating markedly.  BUY

Oil has now been falling for seven weeks in a row and the fall now amounts to a 25 % depreciation form the top. Although we remain structurally bearish oil prices, the fall is overextended and we expect a bounce from the long term moving average.

Gold has been building a base but last week’s reversal points to more weakness ahead and a potential re-test of the April lows. Only the completion of a higher low would send a strong BUY signal.  WATCH

Last week’s fall brought Silver back to its long term support, a break of which would be outright bearish. A quick reversal is needed to change the trend.  WATCH

Palladium is at a critical juncture after the strong rally of the past two weeks. It is challenging the previous high without having yet convincingly broken out.   TAKE PROFITS

Last week’s bullish reversal marks the end of the Bear trend that we timed perfectly in April.  STRONG BUY