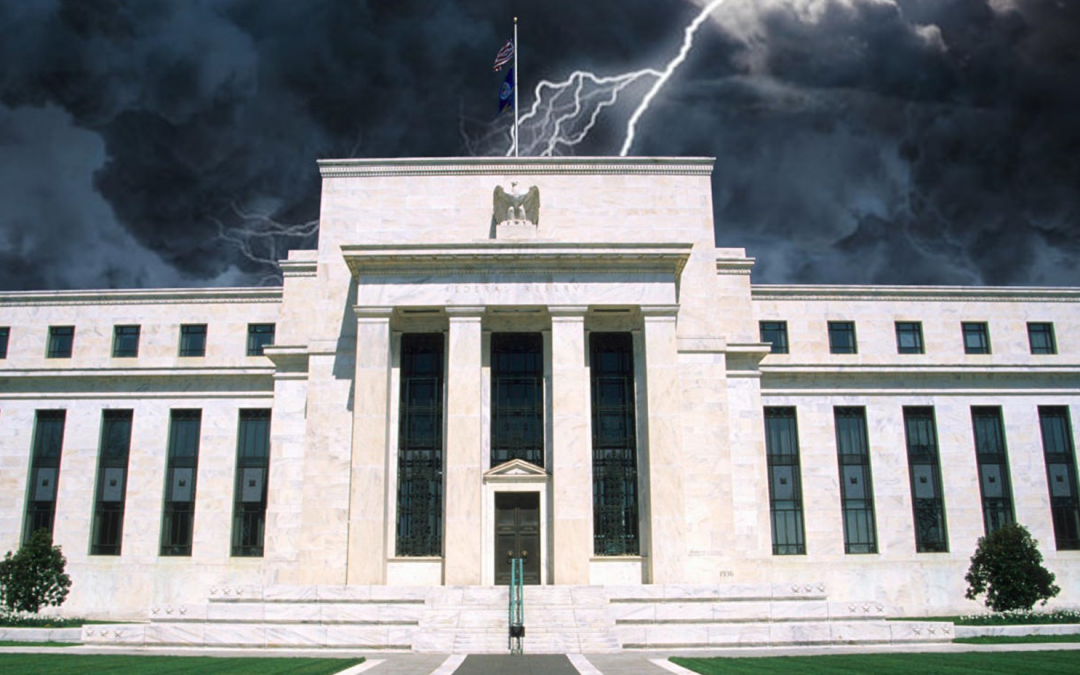 Non content to have destroyed a globalised world order patiently built over 50 years through his Trade wars and his corporate bullying tactics, Donald Trump has also questioned the independence of Central Banks, a concept and a reality that has taken decades if not centuries of economic management to get at.

Contrary to other US Presidents, Donald Trump made the stock market the benchmark of his economic management putting himself in a dangerous position.

Unfortunately, with his Trade Wars started in February 2018, Donald Trump put an end to the coincident economic recovery that had taken hold in 2016 and 2017,

His tax cuts of 2018 gave a shot in the arm to corporate profits that year, but their affect was bound to be a one-off thing and Corporate earnings are now declining,

So, the only thing remaining is liquidity, and over the past few months, Donald Trump has been attacking the FED and its Chairman Jerome Powell, bullying then verbally to stop raising rates first in 2018 and now to lower rates again after more than 10 years of flat to increasing interest rates.

Even if the US President does not have the legal powers to remove the Chairman of the FED – contrary to the Turkish President EDOGAN who did just that in June 2019 – his calls on the FED to lower rates by 50 basis points again yesterday have a significant impact on the market psychology and investors’ expectations.

The US FED is now between a rock and a hard place !

Whatever they do today will end up being a policy mistake !

Today, the FED has the choice between three options :

Frankly this is really what the FED should and would have done had the psychological pressure on them not been raised by Donald Trump and investors.

As we have argued many times in our recent publications, the current economic slowdown is not a cyclical slowdown but an exogenous shock on Investments and production induced by the uncertainty created by Donald Trumps Trade Wars.

For the sake of total transparency, we reproduce below the entirety of the Economic data released over the past month.

Manufacturing is in expansion ( > 50 ) and better than expected
Employment is strong and rising
Vehicle Sales were stronger than expected ( 17.3 against 17.0 expected )
Mortgage application are soft
Services are expanding at a higher rate than the previous month
Factory orders are soft but contracting at a lesser pace than in previous months

Durable Goods orders are declining, but expanding when taking off transportation
Non -Manufactoring Index is expanding strongly even if less than anticipated
Non-Farm Payrolss are extremely strong ( +224 000 instead of 160’000 expected )
Private payrolls and even manufacturing payrolls are strong
Hourly earnings are stable
Labor force participation is stronger than expected
Small business Optimism remains strong

The Housing Price Index is strong, which may explain that
Mortgage applications are contracting, but less so than the previous month
Housing Starts and Building permits are contracting
The Philadelphia FED Business outlook index rises stromgly
Consumer Comfort is strong
The Leading indicator is much weaker than expected as CEO’s are decidedly pessimistic
University of Michigan Business Index is lower than expected but stronger than previous month

GDP came out much stronger than expected at +2.1% instead of +1.8%
Personal Consumption came out at +4.3 %, MUCH stronger than previous months
the PCE deflator is stable MOM and slightly lower YOY

When looking at the full data, the picture of the US economy is definitely one that does NOT require a rate cut

. Economic growth at +2.1% is strong and higher than interest rates
. Consumption and Employment are extremely Strong and rising
. Manufacturing is weak and Real Estate prices are plateauing
. Consumer Confidence is strong
. Business Confidence is weak

With all due respect to the FED,

there is STRICTLY NOTHING in these figures that would justify a change in monetary policy and lower interest rates.

Moreover, the depressed side of the data comes entirely from the businesses and the CEOs’ pessimism does not come form monetary policy or lack of consumption, but from the Trade War uncertainties and the fear than tariffs will have to be passed on to consumers or to be reducing corporate earnings.

Lowering interest rates will actually do nothing to smooth their anxiety. Only a resolution of the Trade War will.

So the FED should do nothing !

BUT IF IT DOES NOTHING, IT WILL AMOUNT TO A POLICY MISTAKE AS INVESTORS WILL BE DISAPPOINTED AND THE STOCK MARKET WILL TANK, MAKING THE UPCOMING SLOWDOWN A SELF-FULFILLING PROPHECY.

BY CONFRONTING THE FED, DONALD TRUMP HAS DEPRIVED IT FROM THE MOST IMPORTANT TOOL OF ANY CENTRAL BANK :

ALL THE PAST AND PRESENT CENTRAL BANKERS OF THE WORLD KNOW FULL WELL THAT THEIR MANAGEMENT OF EXPECTATIONS WAS MUCH MORE IMPORTANT THAN THEIR ACTUAL MOVES.

This option is the expectation of the majority of economic commentators as it is the balancing act between the reality of the economic data that calls for no change and the expectation soft the market that have been ramped up by Donald Trump for a rate cut.

Unfortunately it will be a monetary policy mistake as well.

The Direction of interest rates is not something you change from month to month as investors change their mood or the latest set of data shows a different picture than the previous month.

We have now had 10 years of flat or rising interest rates and a decision to lower interest rates would mean that the FED will be in the incapacity to raise them again anytime soon if needed.

The message is would b sending is that the FED is yielding to the President – negating its own independence – and ceding to the pressure of equity investors who have become like drug addicts needing their shot of liquidity for the party to keep on going.

Finally, lowering interest rates in an environment where employment is at record high, wage are growing, the tastes fringes of the population are finally getting into the job market and where consumption is extremely strong is bound to fuel inflation.

In other words, a decision by the FED to lower rates by 0.25 % will have strictly no impact on Business confidence and investments – which are related to the Trade War – but will fuel inflation at the consumer level, driving the US economy into the worst possible situation : STAGFLATION

Although 25 % of the commentators believe that this is what the FED will or should do, lowering. rates by 0.50 % would be an extremely grave policy mistake.

Whichever way we look at it, the FED is in a Lose Lose situation and whatever it does today will not be taken positively by the markets.

Donald Trump has deprived it from its main policy tool : Managing Expectations

and now it has the ugly choice between :

– restoring its credibility as an independent data-dependent institution, and sending equities lower

– Yielding to political and market pressure, and losing its long term credibility.